Wedge-tailed shearwater are back at Kilauea Point National Wildlife Refuge. I can tell by the white splotches on the sidewalk leading from the fee booth, alongside the bookstore, and up the slight hill to where the first view of the lighthouse comes into focus.

Where nene scat resembles a cat’s leavings and is easily scooped; Wedge-tailed shearwater splat their shat in abstract pancakes of flat matter that you couldn’t scoop off the pavement with a spatula.

You wanted to know that, right?

But we’ve had nightly showers of late, and that washes the scat off the sidewalks, so I sometimes forget the mostly brown birds are tucked in their underground burrows, some that extend several feet in length, where they nest.

Until I hear their distinctive, not-so-melodic call.

Its call is captured in this common seabird’s Hawaiian name, `ua`u kani. Or, the “moaning bird.”

My best phonetic translation of it goes like this: oooh ah oooh. After a few rounds of that, the call can end on a rather high note. Some have likened it to mating cats. I get that. Others have said it sounds like a bawling baby. I get that, too.

I’ve heard one story of some nearby neighbors who, after spending about a month in their new home adjacent to the refuge, finally asked a park ranger, “Do you know if anything bad happened in our house?”

They interpreted the courtship call of the Wedge-tailed shearwater as a ghost. 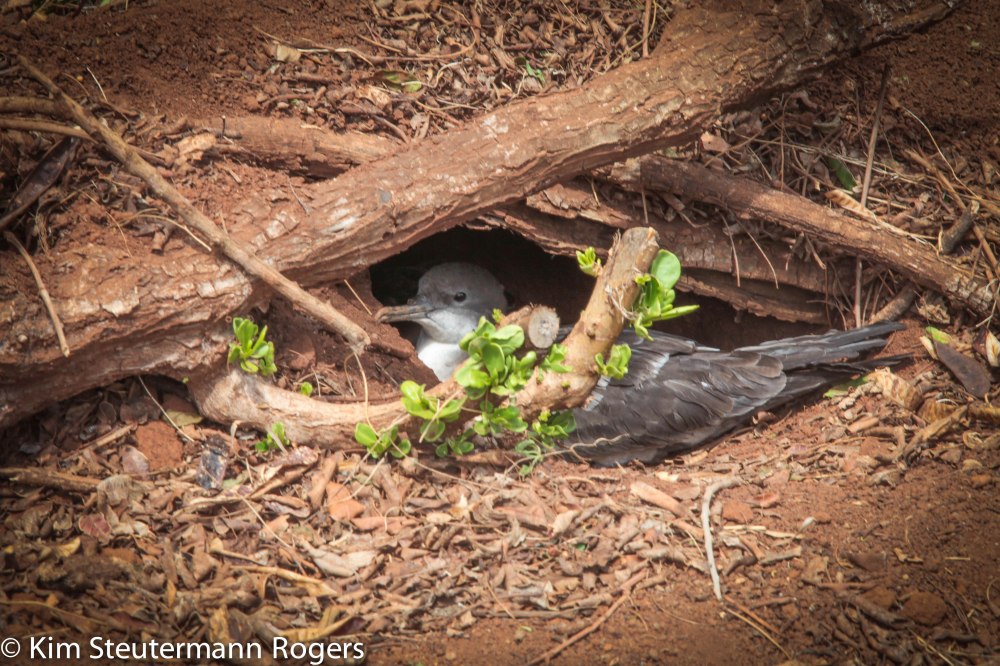 This is one of my favorite words in the dictionary: crepuscular.

This is how I use it in a sentence: The Wedge-tailed shearwater are crepuscular in nature.

That is, they come and go at dawn and dusk. They spend their days at sea, “shearing” the waves, foraging for squid and fish. But they also “pursuit plunge,” diving to depths of 20 to 200 feet for a tasty goatfish or two.

Wedge-tailed shearwater are the reason Kilauea Point National Wildlife Refuge closes at 4:00—to prepare for the birds’ evening return. With their bat-like, erratic-seeming flight, the place can feel like a Hitchcock movie.

Earlier this year, National Geographic magazine reported the extraordinary die-off of seabirds along the Pacific Northwest. Based on necropsies of the birds—in this case, Cassin’s auklets—scientists suggest the birds starved to death due to a mass of warm water that spread across the North Pacific starting last year, creating a dearth of zooplankton, the small seabird’s primary food source.

Whenever a species returns to Kilauea Point for its breeding season, I always wonder about the experiences they’ve had since they left us landlubbers. I hope they’ve found enough food to cover the energy drain of egg-making, egg-laying, incubation, and chick-rearing. Wedge-tailed shearwater return to their Hawaii nesting colonies in March. They lay eggs in early June, incubate them until late July, and continue to come and go, feeding their chicks through November as the chicks fledge. When Wedge-tailed shearwater leave Hawaii, the species is known to forage the waters off Central America.

This past week, we’ve seen a Wedge-tailed shearwater impersonator at Kilauea Point: the Kermadec petrel.*

They may be from the same seabird family as the Wedge-tailed shearwater, Procellariidae, but it doesn’t take long to identify the differences, starting with the high-pitched call—more like a screech—of the Kermadec petrel. It’s unlike anything else heard at Kilauea Point. It can get you to stop mid-sentence, spin around, swivel your head in search for the sound’s source, and perform your own screech of a call that goes, “What the heck was that?”

As it did me this past Friday afternoon about 3:30.

When I finally spotted it, the bird was chasing a Red-footed booby, similar to the way a Frigatebird does, hoping to get the booby to give up the results of that day’s foraging in a behavior known to scientists as kleptoparasitism. Another great word.

Here’s what I’ve learned about the Kermadec petrel since then.

Physically, it’s a medium-sized, brownish seabird with long, broad wings; a square tail; and relatively short, stubby bill. Its most identifying mark in the air for me was its white patch on the outer underwings.

The Kermadec petrel nests in South Pacific and can regularly be seen several miles or more offshore around the Hawaiian Islands—but not generally from a land-based location. Two individuals were spotted last year around Kilauea Point. Is this year’s migrant one of the same? Perhaps it’s looking to nest here. If so, why? Is something pushing a few colonizers north?

The ocean holds many mysteries for us. I often think of seabirds as the canaries of the oceans. Populating a place where few humans venture for long, seabirds know more about the ocean than we do. With all the changes going on in our climactic world, I sure wish a few seabirds would share their oceanic knowledge in a way we could understand. Given time, I am sure they will.

*Alas, I didn’t have my Big Girl Camera with me, so no photos. But my friend Thomas did. Check out his Flickr photo stream for a photo of a Kermadec petrel here. While you’re there, check out all his other AMAZING photographs.