In the days before Cook introduced Hawai‘i to the world and an onslaught of foreigners arrived. Back in the days before the old religion was abolished and missionaries arrived on scene. I’ve read that winged creatures represented messengers of the gods, because, unlike mere humans, birds can fly to great lengths and heights. Places far over the sea. Places high in the mountains, where as the scientific phenomenon known as the orographic effect explains, that are often shrouded in mist and clouds and a sense of the ethereal. Birds can easily mix between the mortal and immortal.

I’ve often wondered whether this has something to do with human grief, as well. I’ve listened to more than one friend describe a visitation from a recently passed parent in the form of a bird outside a window. Too, I’ve read grief memoirs in which the author seeks solace in some way in a bird or birding.

Or the grief-bird connection could just be a coincidence. 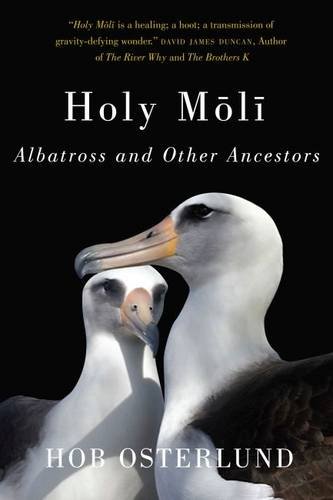 Either way, I was thrilled for my friend Hob Osterlund when her book Holy Mōlī: Albatross and Other Ancestors published a couple weeks ago. And while I wouldn’t label it a grief memoir—it is that and more—I see within it the healing of a young girl in the woman who is Hob today in the love and awe and respect for the amazing winged creature known as a Laysan albatross.

Of course, I love Hob’s subject matter—Laysan albatross, also known as mōlī in the Hawaiian language. I love the stories of Onipa‘a and her umbrella, Colonel Trombone and The Librarian, and the twins Ola and Loa.

I love Hob’s writing style. It is light and fresh and funny and sacred, all at once.

But I expected all that. I’ve sat in writing circles with Hob before and heard her read a few of these passages. I’ve also sat with Hob in Laysan albatross colonies, surveying nesting parents, and swapping out the infertile eggs she mentions in the book. She’s dropped everything and come to my assistance time and again, most especially a few years back when a couple stray dogs tore through a colony of these winged creatures, killing chicks one at a time, chicks that only the day before we’d banded, chicks that were about to fledge—fly for the very first time—in the very near future.

What I didn’t expect from Holy Mōlī was Little Hob. For all we’ve shared over the years, I didn’t know the details of Hob’s childhood, what a feisty kid she was, her tomboy ways, and, most especially, how fiercely she loved her mother, who died of cancer when Hob was young. That’s when I began to understand why Hob was such a birder, as her mother was, and as an adult why Hob took up nursing—her mother’s profession, as well.

Through it all, the stories of Laysan albatross and Little Hob, what comes alive on the page is Hob’s own personality. Her love for life. Her reverence for Laysan albatross. Her humor. The last, we learn, is a trait she inherited from her father.

All this to say, there are many reasons to read my friend Hob’s new book. Please do.

You can purchase it on Amazon; or through her publisher; or for your very own autographed copy, through Kaua‘i Albatross Network. Maybe she’ll even sign it “Her Hobatross,” a name I’ve recently starting calling her.