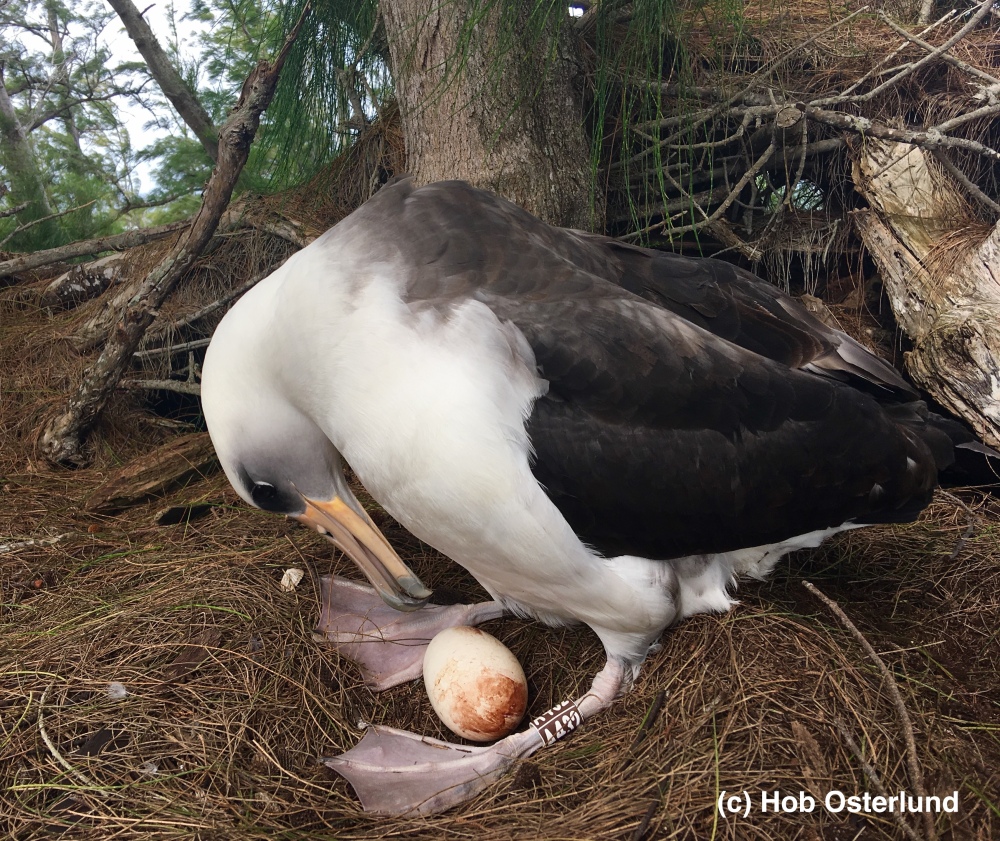 Consider the egg. The obvious part, the shell, is made up of calcium carbonate crystals and on close examination, its grainy texture contains thousands of tiny pores. The shell is actually a semipermeable membrane through which air and moisture can pass. I figure that must also be how Laysan albatross are able to communicate and, possibly, imprint on their chicks, because as soon as an egg is laid, the parents start talking to their newborn. They’ll stand, point their serrated four-inch bill between their legs and speak every so sweetly, “Eeh, eeh, eeh.” Both parents get in on the action, because the world of albatross parenting is an equal opportunity endeavor.

Eggshells also have an outer coating—called the bloom or cuticle—that helps keep out dust and bacteria. Good thing, because there’s plenty of minuscule dust particles blowing around Kaua`i’s pleasant breezes, and the act of pushing an egg the size of a 12-ounce soda can out of an opening the size of the very tip of your pinky finger can involve a few drops of blood.

The first reported Laysan albatross arrived at Kauai`i’s Kīlauea Point National Wildlife Refuge for this season’s breeding on November 6. By November 21, we had albatross eggs on the ground. Eggs make everyone happy. Those who lay the eggs. Those who incubate the eggs. And those biologists and albatross advocates who year after year roam albatross nesting grounds collecting data on what individual birds have returned and who is sitting on eggs.

This year, one egg in particular made a few of us non-bird-beings particularly happy. To truly understand our joy, I need to share the backstory of a bird sporting a leg band reading “A432.”

Late in the nesting season of 2012, the day after chicks had been banded just prior to their fledging, a couple of dogs tore through a colony, killing seven chicks and injuring another five. A432 was one of those five. It was late on a Friday night. Most people were wrapping their workweek and headed for home. However, as the sun set and a curtain of darkness closed across Kauai`i, a few of us from Kaua`i Albatross Network responded. Caring neighbors offered towels and boxes and dog kennels, and the injured chicks were scooped up and delivered to Save Our Shearwater, a seabird rehabilitation facility that was first started to rehab endangered Newell’s shearwater and Hawaiian petrels. By now, it was long after dinner time, but Tracy Anderson stayed into the wee hours of the night to evaluate and stabilize the chicks. One of the five had to be euthanized, but the other four spent anywhere from one to three weeks under Tracy’s care while recovering from their injuries. One by one, these four were released at Kīlauea Point National Wildlife Refuge, and one by one, each and every one of the four fledged, taking their very first flights to sea where they live the vast majority of their lives.

Laysan albatross spend their first three to five years of life, on average, at sea before touching land again. When they do return, it’s to find a mate, and that process can take a few more years. Typically, a Laysan albatross won’t start breeding until six to 10 years of age. The work of an albatross advocate is one of patience, something we learn from the albatross themselves. So, once the four rehabbed albatross chicks fledged in the summer of 2012, we had to settle in and wait to see what would become of them.

The first re-sight of one of the rehabbed birds—sporting an auxiliary band of A441—happened three years later at Ka`ena Point on O`ahu by Pacific Rim Conservation’s Lindsay Young. Then, last year, both A441 and A432 showed up on Kauai`i. But the really exciting news for those of us involved in this rescue and rehabilitation effort took place last week when Kaua`i Albatross Network founder Hob Osterlund (some of us refer to her as “Her Hobatross”) conducted her regular albatross survey to record the identification bands of albatross in nest cups with eggs. As she approached one, the nest’s occupant stood up, and Hob noted the albatross’ leg band. Then, Hob texted me. “Kimsters, am I right that A432 was one of our rescues?” she wrote. “Was that from five years ago?”

I grabbed one of my old yellow Rite in the Rain notebooks in which I keep all my albatross data and flipped some pages.

Who knew an egg could make a person so happy? Albatross + photography = Albatography. If you haven’t heard, I’ve started a special project called Albatography by Kim, a website where I’m selling my albatross photography and giving a percentage of the proceeds to organizations helping Laysan albatross. Please visit me at www.albatography.com.