[Are you following me at Albatography.com? If not, you’ve missed some blog posts. Here’s my latest.] 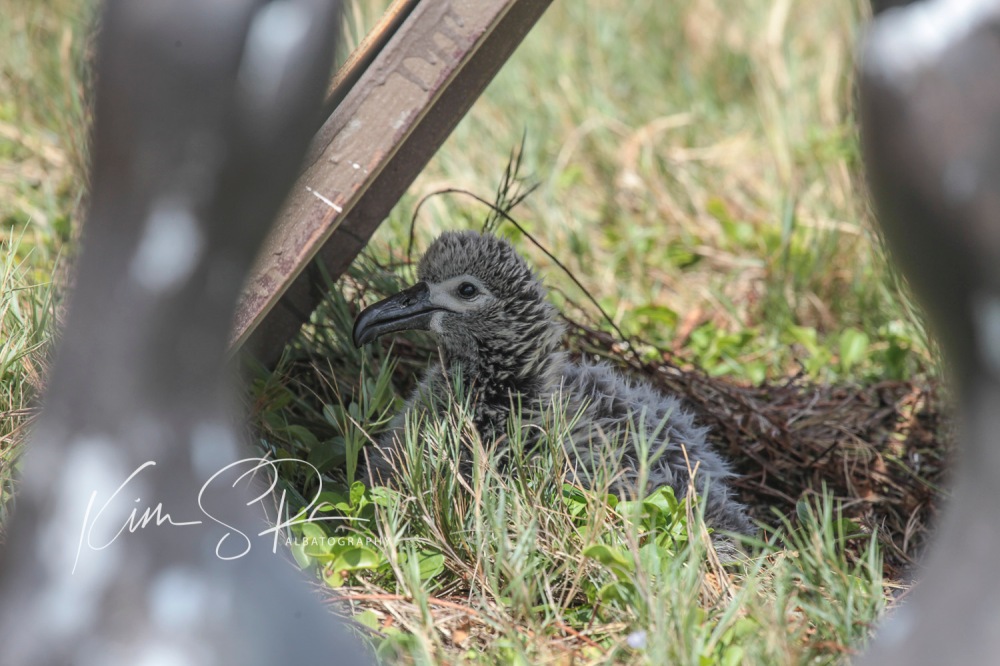 We all have our preferences when it comes to where to raise a family. City. Suburbia. Country. Mountains. Islands. Valleys. Apparently, Black-footed albatross like the beach, as their nests can usually be found along the edges of the islands and islets across the Northwestern Hawaiian Islands making up Papahānamokuākea Marine National Monument.

But like all albatross, the Black-footed albatross is highly philopatric, meaning they return to the same place they grew up to find mates and build nests of their own, and they’re as steadfastly loyal to their nests and chicks as Laysan albatross, even in windstorms that sweep across the wintry Pacific and all but bury them in sand.

Unfortunately, these nesting preferences face some challenges. As ice caps melt at the poles, sea levels are rising. High tide line is moving higher, swallowing up beaches on these flat-as-pancake atolls in the central Pacific where 99.99 percent of Black-footed albatross nest. As ocean temperatures are warm, storms the world over are intensifying, generating winter waves big enough to roll over the rings of once-protective reefs encircling atolls and washing up, and in some cases over, nesting birds. On the beaches, Black-footed albatross are the first to lose their nests, their eggs, their chicks.

It’s fitting that yesterday, among Laysan albatross soaring in figure eights above my head, I spotted a dark shape. The color black isn’t always associated with good, but seeing a Black-footed albatross felt like good luck to me. It was my first sighting of the big black bird—with a seven-foot-plus wingspan—in the Main Hawaiian Islands. Hopefully, in a half dozen years or so, I will be seeing more.

A couple weeks ago, before the next big winter storm could sweep them out to sea, 22 Black-footed albatross chicks were rescued and brought to O`ahu where they will be hand-raised for the next four to five months. All this is part of an effort by multiple organizations to create a new colony of Black-footed albatross on the “high” island of O`ahu. It’s a repeat of a similar recent effort on behalf of Laysan albatross.

Last year, I wrote a three-part series for Audubon about the (re)creation of a Laysan albatross colony on O`ahu’s North Shore. (You can read part one here, and part two here, and part three here.) Many of the same organizations are involved this year in the creation of a Black-footed albatross colony in the same place—at James Campbell National Wildlife Refuge; however, the ones tasked with the monumental task of raising the chicks falls in the hands of Pacific Rim Conservation.

I also find it fitting that I first met Drs. Lindsay Young and Eric Vanderwerf ten years ago at Midway Atoll National Wildlife Refuge, where we counted albatross nests together. Since then, they started the non-profit conservation and research group called Pacific Rim Conservation. Their efforts can be summed up in their vision statement: Restoring biodiversity. Their goal in this project is “no net loss.” That is, restoring every square foot of seabird habitat that’s lost due to climate change. In 2017, Pacific Rim Conservation worked with 22 different bird species, banded more than 200 birds as part of their research, translocated four species of Hawaiian seabirds to safe breeding colonies, wrote three scientific journal articles and five management plans, built 3,200 linear feet of predator-proof fencing, eradicated non-native, terrestrial predators from 65 acres, and restored 18 acres of habitat by removing invasive weeds and replacing them with native plants. They’re busy people making an impact on Hawaii’s native birds by conducting pioneering science and implementing visionary conservation projects.

Since I started this website late last year, Albatography has made donations to three different organizations working on behalf of albatross totaling $500. And it’s all because of you. When you add a little Albatography to your life, you help albatross. Mahalo!