Another gray start to the day that stayed with us through the evening.

I listened to an interview with novelist Max Brooks on NPR’s Fresh Air with Terry Gross.

When news of COVID-19 started making headlines and people weren’t quite convinced about its deadly potential, Max and his father, comedy filmmaker Mel Brooks, produced a video to emphasize the need for social distancing, especially for kupuna, elders. It drives home a good point while incorporating humor. It’s Mel Brooks, after all. The NPR interview with Max Brooks focused on COVID-19, as well as, pandemics, in general. Thing is, Max isn’t a scientist. He doesn’t work in the medical profession. He wrote a book called World War Z (that’s been made into a movie starring Brad Pitt) in which a global viral pandemic turns people into zombies. It’s currently on sale as an e-book for $2.99. I don’t normally read horror; however, I also have a hard time turning down a bargain.

Here’s what I found interesting about the whole interview: Max Brooks is a novelist. A novelist who has done a deep dive of research into  pandemics. So deep he’s considered an expert. He’s partnered with the Bipartisan Commission on Biodefense to create a book called Germ Warfare. He’s also a fellow at the Atlantic Council’s Brent Scowcroft Center for Strategy and Security and the Modern War Institute at West Point.

Cool: even novelists can be scientists. Almost.

In his interview, Max made many good points. Panic isn’t preparedness, he said, and, “Panic can spread faster than a virus.” Case in point: toilet paper hoarding. In addition to social distancing and washing your hands, he said to “practice good fact hygiene.” Only listen to experts and don’t spread misinformation. This will help quell fear.

Every now and then, the gray skies danced with blue; alas, not enough for Lulu to do her sun-baking thing.

At one point, I decided to go for a drive-about. Not to go shopping or interact with people but to go for a drive. Think: Sunday drive. After two weeks of working from home and sheltering in place, I wanted to see a bit of the island—and listen to a new audio book. But, then, I checked Facebook and saw this:

So, Lulu and I stayed home.

My friend Anne lives in the Monterey area of California. Yesterday, she wrote on her blog about, among other things, fear and how fear can manifest into anger. Case in point: the anti-Chinese sentiment that’s emerged as COVID-19 spread across the United States. I have a friend who flew her college-aged daughter home to Hawaii from the mainland, concerned about threats and attacks aimed at Asian Americans. Hawaii is a melting pot; however, we’ve seen hate exhibited here, too, in the last few weeks. I’ve heard stories of insults—and, even, rocks—hurled at visitors, being told to “Go home.” In some cases, the “visitors” turned out to be Kauai residents.

This situation echoes a story that played out in Hawaii more than 200 years ago with the first arrival of Westerners and their diseases.* Of course, with the arrival of foreigners, not only was there a loss of life, but, eventually, a loss of land and the illegal takeover of the island kingdom. The resulting hurt and anger from this simmers in Hawaii today. It’s the story upon which the State of Hawaii is built.

I may be a 20-year resident of Hawaii, but I am still a visitor, a guest in my own home, and I still represent the people who nearly killed off a race and who stole a nation. I recognize this. As such, I try to practice two things my mother taught me decades ago: 1) Clean up after yourself; and 2) Leave the place better than you found it. When I used to spend the night at my high school friend Tracy’s, my mom told me to wash my dirty dishes and make the bed in the morning. The irony is I often had to be reminded again and again to do those two things at home, but when I slept over at Tracy’s, I did it, good girl that I was then.

The truth is, I didn’t always take great care of my earth home, either, before moving to Hawaii. But there’s something about living on an island that’s made me much more aware of the fragile nature of our ecosystem, here and across the world. Living on an island makes me want to be a better global citizen.

The U.S. now tops the world leader board for the most reported COVID-19 cases. We’re at 106 reported cases statewide. Holding at five on Kauai. Here’s a mind-blowing statistic: On Tuesday, the total number of mainland and international (except Canada) passengers arriving at Kauai’s Lihue Airport was down 98.5% year-over-year to a mere 38 passengers. That’s startling. Car rental companies are having to find novel ways to stash their vehicles around the island. On Oahu, 1,500 rental cars are parked inside Aloha Stadium. 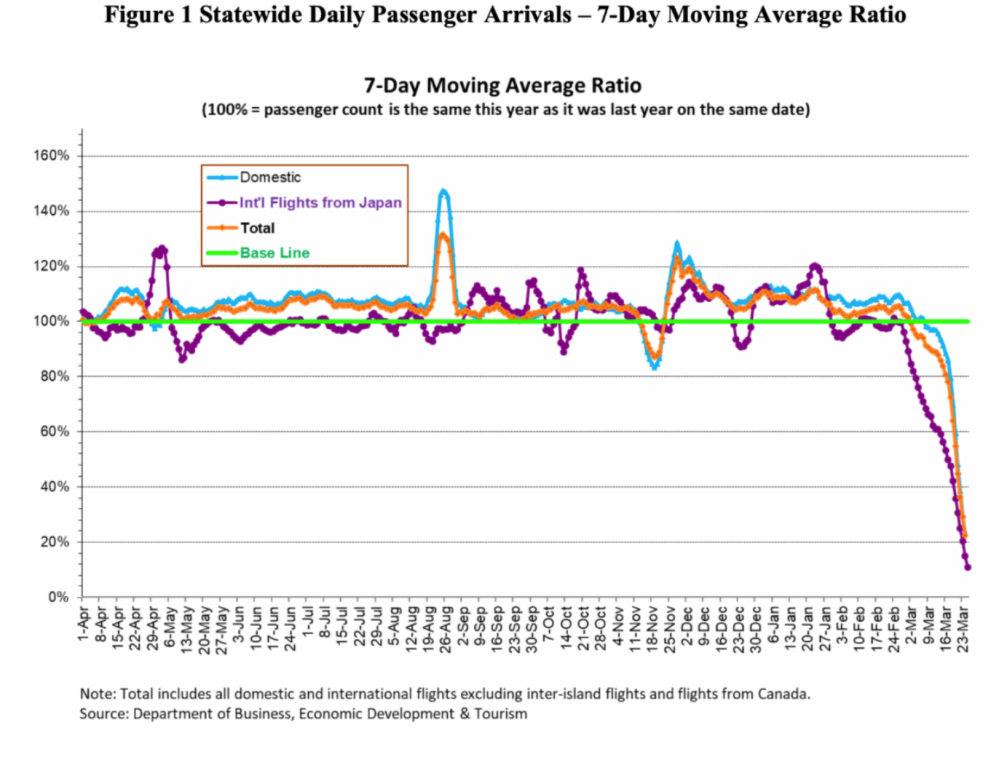 All visitors and returning residents are required to quarantine for 14 days upon arrival in Hawaii. Schools are closed. Tour operations are halted. Effective today through April 30, 2020, everyone in the State of Hawai‘i is required to stay at home or in their place of residence. Under the proclamation, individuals may leave their home or place of residence only for essential activities, to engage in essential businesses and operations, and only if their work cannot be conducted through remote technology from home.

This is how you flatten the curve.

*For more on the waves of pandemics killing Hawaiians, read this recently published Smithsonian story about the many epidemics in the Islands.