Today is the 50th anniversary of Earth Day. I don’t remember what I was doing on April 22nd in 1970. I was seven years old living in a split-level home in the western suburbs of Chicago. We had a dog named Missy and were a few years away from adding Patches the rabbit to our family. I hadn’t yet started spending my summers in the country outside St. Louis with my grandparents, but we visited often, and I rode my favorite pony Lucky.

Thirteen years ago, we adopted our rescue, Nickel, on Earth Day. That’s how I remember her “gotcha” day.

Today, I worked from home, planning virtual activities around ‘Ōhi’a Lehua Day this Saturday, April 25th, so while I didn’t get beyond my yard, in a way, I was celebrating. Maybe, more accurately, pre-celebrating.

Thankfully, I’m not the only one staying home, and as a result, our world is turning cleaner and wilder, according to an article today in the Honolulu Star Advertiser. It’s no surprise that air pollution is dramatically dropping around the world as we shelter at home. Skies are clearer and cleaner, both night and day. What I didn’t know was that air pollution kills up to seven million people worldwide per year. Seven million. Why don’t these numbers headline our daily news media and trigger daily press conferences by national, state, and local government officials?

In wildlife, anecdotes are emerging about animals expanding their territories—coyotes in downtown Chicago and San Francisco, hungry monkeys in India burgling homes and raiding refrigerators, goats parading through a town in Wales, and, at least, one kangaroo was spotted hopping through Adelaide in Australia.

I’ve been asked by some friends about COVID-19’s impact on Hawaii’s wildlife. It’s true our visitor counts have dropped from tens of thousands of people per day on Kauai to one or two. It’s true our governor has implemented a stay-at-home order across the state. True that our County of Kauai mayor highly discourages travel outside the home for any activity except what’s been defined as “essential.”

But many of the impacts to Hawaii’s endangered fauna are not an immediate cause and effect. Not like turning off the light switch of air pollution from vehicular traffic. In Hawaii, we have more of a long-tail response. Plastic isn’t disappearing from our ocean overnight. The “mosquito line” isn’t plunging down our mountains giving our forest birds more disease-free habitat, allowing for population explosions. Hawaiian monk seals aren’t moving inland in search of food—unless our refrigerators become the only  reservoir of lobster, octopus, eel, and fish. Then, maybe, in time, monk seals will come knocking on our doors;-)

I can think of two ways, if this lockdown were to continue into summer and fall, where wildlife might benefit. 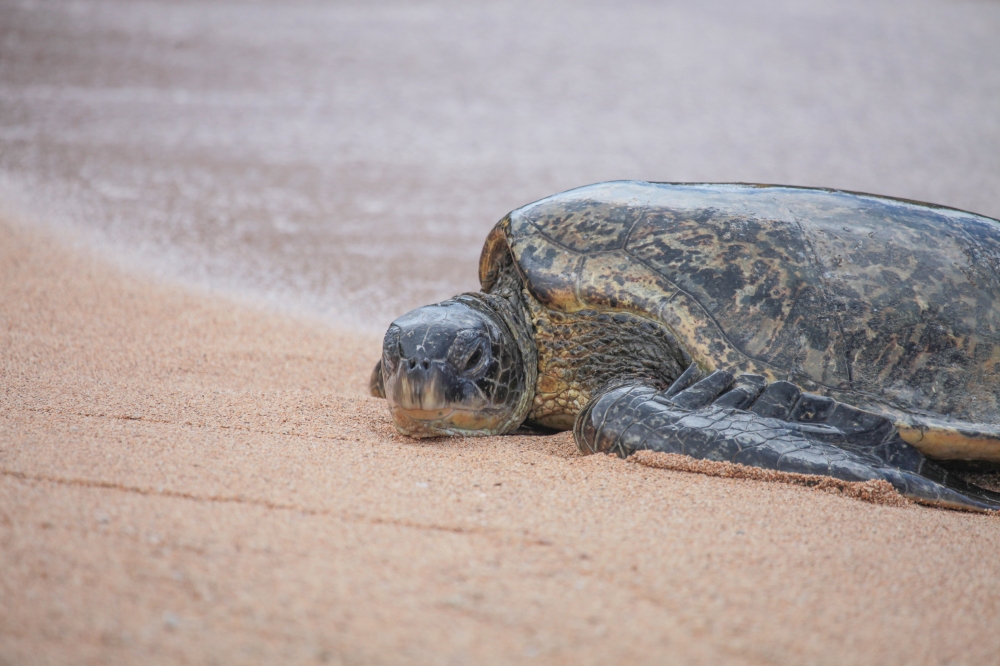 In summer, sea turtles haul out to nest on beaches. Fewer people on our beaches means fewer disturbances of females coming ashore and fewer footsteps disturbing turtle nests, all leading to greater potential of turtle hatchlings making it to the ocean.

Our endangered seabirds—Newell’s shearwater and Hawaiian petrels—are returning from sea right now, starting their breeding season. Their chicks will fledge late this fall. They do so at night, using the reflection of the moon on the ocean to guide them to the sea—and food. Light pollution can confuse these youngsters, causing them to circle the bright lights of civilization—think ball fields and parking lots—and fall to the ground in exhaustion. Once down, they have little to no ability to get off the ground again. Our current curfew and mandates against social gatherings would ensure them the dark nights they need to fledge.

But no one wants to shelter in place for the rest of the year.

And yet. Can’t we shelter at home for just one day out of the week going forward? Say adopt Sundays as a true day of rest in which we all stay home, stop polluting the air, stop trampling sandy habitat, stop furthering the erosion of hiking trails. And let’s all work from home one day a week—we’ve proven we can do it. When it comes to the visitor industry, let’s use this time as an opportunity to make changes.

Let’s go from a four-season visitor destination to a three-season destination—maybe to coincide with the Hawaiian season of makahiki. I’d also like to see all visitors charged a natural resources fee ($25 or $50 per person) that would be earmarked for conservation of our fragile ecosystem—trail maintenance, invasive species eradication, reforestation, comfort station upkeep; that kind of thing. It’s not my idea, and it’s not new. It was discussed at last year’s Hawaii Conservation Conference, and it’s already being down elsewhere in the world—New Zealand, Australia, Japan and Galapagos.

Now’s the time, an opportunity. Something similar happened on Kauai after the massive floods of April 2018. Both Hāʻena State Park and Nāpali Coast State Wilderness Park were closed for fourteen months. When they re-opened, there was a reservation system, a fee for entry (both for non residents), and a cap of 900 visitors to the park per day.

Could something like this work for all Hawaii? Or have I just been cooped up too long?

In Hawaii, our statewide count bumped by six to 592 cases. On Kauai, we are still at 21, with no new cases in over a week.