The day started gray and quiet. The sun soon chased away the gray, but the quiet remained. In fact, it was too quiet.

I walked to the edge of the lanai where I could see the bush with the shama nest. I watched for entering and exiting parents but saw none. I couldn’t hear anything, either.

So, I pulled up a chair, sat with my tea, and watched. Eventually, I saw the female alighting on a low branch of a plumeria tree. From there, she hopped to a post along the stairway leading to the lanai and down among some leaves on the ground. Eventually, I saw her with something in her beak, and she zipped around the corner of the house for the nest. Then, I heard the chicks doing their screeching thing. Phew. I was worried a cat or rat had gotten them during the night. That happened to a nest in a friend’s tree in Hanalei.

It was a little while later that I realized I hadn’t seen the male yet, and I started to worry again. I went inside and alerted Eric, but he’s not much of a worrier. I walked to the end of the lanai and waited. No male appeared. Should I trap the cat I’d seen earlier in the week roaming through our yard?

Finally, I went downstairs to my office, ostensibly, to do a little writing but also for the comfort of the screech-screech-screeching chicks. At least, they were getting fed. Will I have to find mealworms to make up for the missing father?

It didn’t take long and Eric popped his head in my office door. He’d spied the papa shama. Was he feeding the chicks, I asked. He was.

Eric’s been on a yard kick during this lockdown, but he knows not to mow. That’s my terrain. I like to listen to podcasts and audiobooks while I steer our riding lawn mower around our “yard” of weeds. And I wanted to start a brand new, recently published book I had just downloaded by Carl Safina called Becoming Wild: How Animal Cultures Raise Families, Create Beauty, and Achieve Peace. 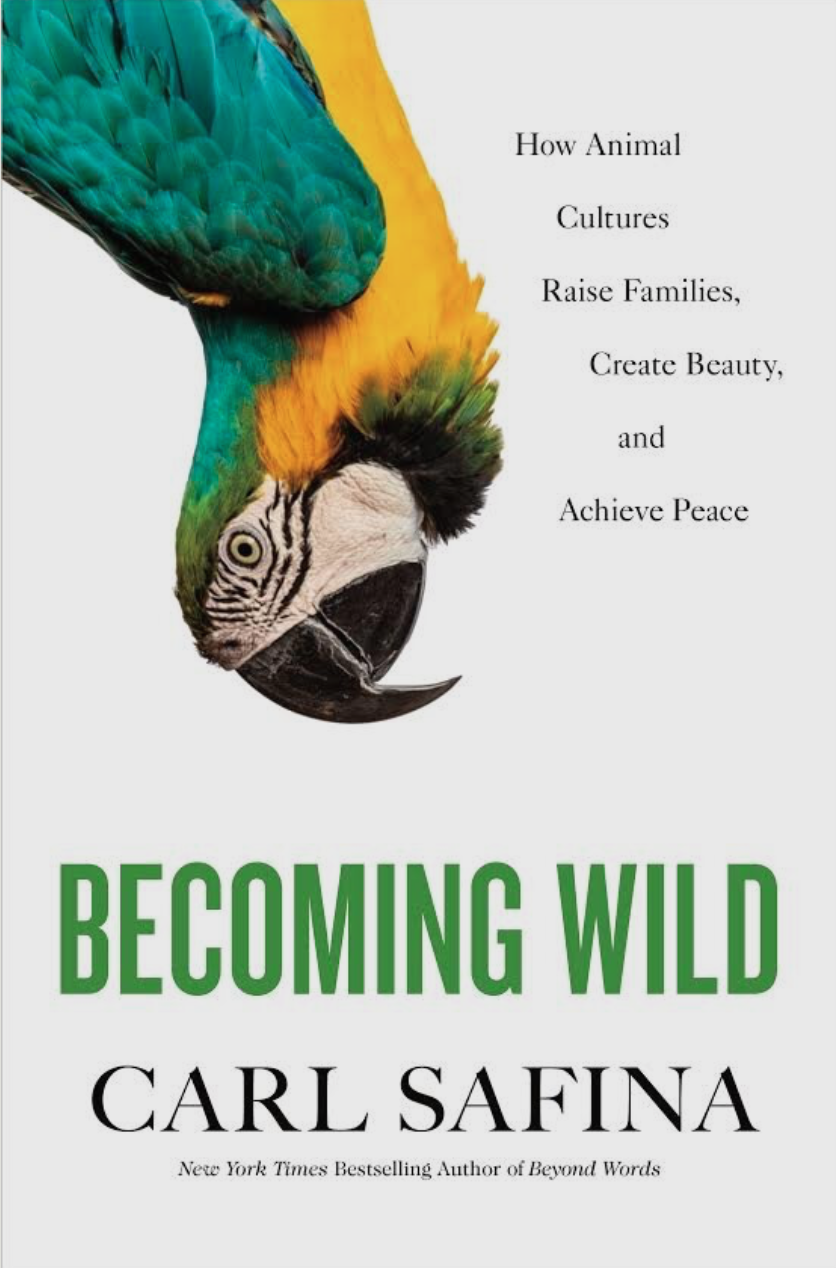 I first met Carl on the pages of one of his first books, Eye of the Albatross: Visions of Hope and Survival. Then, I was lucky to spend some time with him during a few of his recent visits to Hawaii. Now, of course, I read everything he writes, and he does not disappoint.

Before I started his newest book, I read an article Carl authored and published earlier this week in the New York Times, titled Melville’s Whale Was a Warning We Failed to Heed. It’s super insightful. Carl packs more interesting information in a sentence than those baby shama chicks ingest in a day. He also has a nice way of putting words and thoughts together. One tidbit he dropped like a sliver of pocket lint was this about the real-life event that inspired Herman Melville’s writing of Moby Dick: “As Essex’s boats were harpooning female sperm whales, a huge male, around 85 feet, rushed and holed the 88-foot ship, twice.”

I’ve read Moby Dick a few times. (Note: I may not have completed it all three times, but I can remember three times in my life when I read a good portion of the book.) And I’ve never given much thought behind the whale’s intention for stoving the whaleship Essex. But it’s clear: the whale was protecting his fellow whales.

And there we have the point of Becoming Wild—that other species besides homo sapiens live in communities, have cultures, and, therefore, look out for each other. Having listened to a couple hours of Carl’s new book, it’s even more obvious to me that the whale dubbed Moby Dick would do anything he could to protect others in his family who were being viciously harpooned, including ramming a whale ship that was a third to nearly twice as big as he was.

In addition to sperm whales, Carl takes the reader inside the lives and cultures of scarlet macaws and chimpanzees. The audio book runs 13 hours and 51 minutes; I clipped off two this afternoon. I’ve got 11 hours and 55 minutes left. But I won’t be able to wait for the next time the grass needs mowing to listen to more.

If you want to hear from someone else who has read the entire book, read a review here.

If you want to buy the hardback from my neighborhood book seller, The Homer Bookstore, click here.

Sadly, Hawaii added another death to its pandemic loss. That makes 17 people in Hawaii who have died of COVID-19. The statewide case count moved up by two to 622. On Kauai, we are happily stuck at only 21 cases.