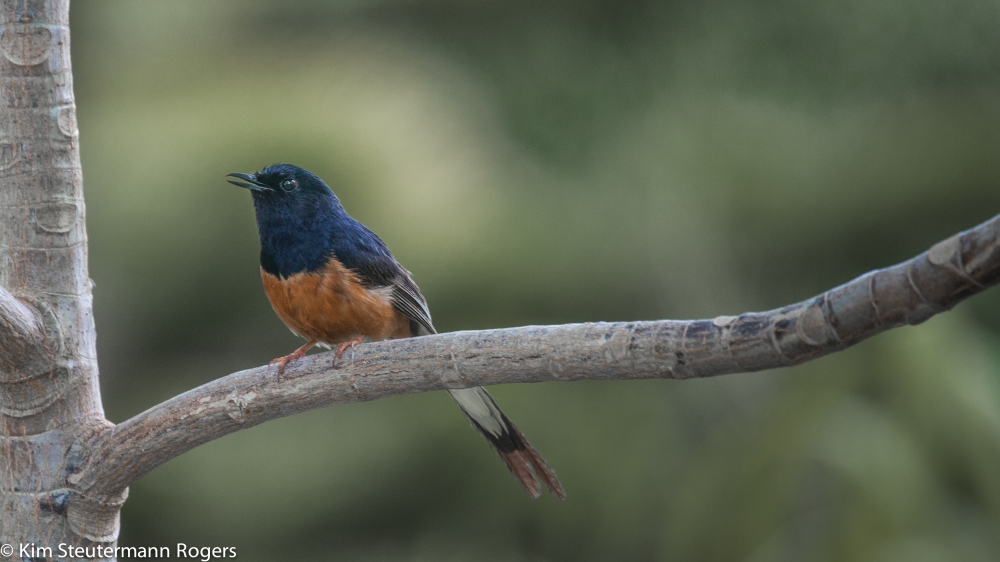 These darn birds. They taunt me all day long, buzzing by my window, sometimes sitting on a tree limb no more than six feet away on the other side of the glass. When I look his way, I swear he’s looking right at me–and he tilts his head. Then, there are the sounds. The male white-rumped shama perches outside one open window and the female takes a position outside the opposite open window. Then, they call to each other–all afternoon, in stereo, begging me to come play with them. Finally, I succumbed, and one result is above.

I’ve been researching Mark Twain’s depiction of animals in his writings.

Later in his life, he became well-known for his views on animal rights, writing a short story called A Dog’s Tale about a family dog who saves a baby from a fire. At first, the dog gets the royal treatment, a hero. Then, things go downhill from there when some men start a philosophical–and, then, medical–debate about the dog’s motivating behavior. It’s a stunning short story, one of my favorite’s of Twains, and in its time was quickly adopted as a manifesto worldwide by anti-vivisection societies–those against the use of a living animals in experiments. That short story makes up for the Old Bastard losing his Maui notebook and sending me on a wild goose chase.

On a lighter note, Twain wrote loads of humorous stuff about animals, even birds. Take this passage about crows in India from Following the Equator:

If I sat on one end of the balcony, the crows would gather on the railing at the other end and talk about me; and edge closer, little by little, till I could almost reach them; and they would sit there, in the most unabashed way, and talk about my clothes, and my hair, and my complexion, and probable character and vocation and politics, and how I came to be in India, and what I had been doing, and how many days I had got for it, and how I had happened to go unhanged so long, and when would it probably come off, and might there be more of my sort where I came from, and when would they be hanged, – and so on, and so on, until I could not longer endure the embarrassment of it; then I would shoo them away, and they would circle around in the air a little while, laughing and deriding and mocking, and presently settle on the rail and do it all over again.

And this about birdsong, also in Following the Equator:

The song of the nightingale is the deadliest known to ornithology. That demoniacal shriek can kill at thirty yards. The note of the cue-owl is infinitely soft and sweet–soft and sweet as the whisper of a flute. But penetrating–oh, beyond belief, it can bore through boiler-iron. It is a lingering note, and comes in triplets, on the one unchanging key: hoo-o-o, hoo-o-o, hoo-o-o; then a silence of fifteen seconds, then the triplet again; and so on, all night. At first it is divine; then less so; then trying; then distressing; then excruciating; then agonizing, and at the end two hours the listener is a maniac. When Eric got home and started working on the bench, papa shama decided to inspect. Darn birds. They’ll be sleeping in our bed next.